How Singapore is improving its quality of living: Interview with Khoo Teng

Mercer had the privilege of interviewing Mr. Khoo Teng Chye, the Executive Director of the Centre for Liveable Cities (CLC). Mr. Khoo Teng Chye was more than happy to discuss his vision on the quality of living within his city, as well as the various challenges, opportunities, and successes he’s experienced throughout the past 20 years.

ABOUT THE CENTRE FOR LIVEABLE CITIES 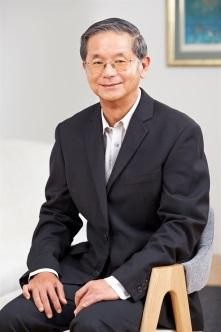 Set up in 2008 by the Ministry of National Development and the Ministry of the Environment and Water Resources, the Centre for Liveable Cities (CLC) has as its mission “to distil, create and share knowledge on liveable and sustainable cities”. CLC’s work spans four main areas – Research; Capability Development; Knowledge Platforms; and Advisory. Through these activities, CLC hopes to provide urban leaders and practitioners with the knowledge and support needed to make our cities better.

Over the past 20 years, Singapore has been considered a smart city and is continuously improving the living standard of its residents. In your opinion, what have been the primary challenges to overcome?

Cities with the highest quality of living standard, based on Mercer indices, are cities with a low population density. Therefore, it is even more challenging for a city such as Singapore to be at the top for high living standards since very few cities have both a high quality of living and high population density (above 7,700/km²). Singapore is one of those cities, and due to its geographical position and scarcity in resources, the city had to think differently and strive for improvement by implementing specific policies, which would enable us to develop economically and infrastructurally, while keeping in mind the safety of residents.

"  Singapore’s main issues will remain the same over the coming decades – Singapore is an island; therefore, resources have been and will continue to be one of the main challenging drivers. Should Singapore want to remain competitive, it will need to grow both its economy and its population. There is a need to find more innovative ways to increase our liveability, even though our population will continue increasing in an already highly-dense city. "

The below chart depicts the correlation between a highly dense city and a high living standard (using Mercer Quality of Living data). 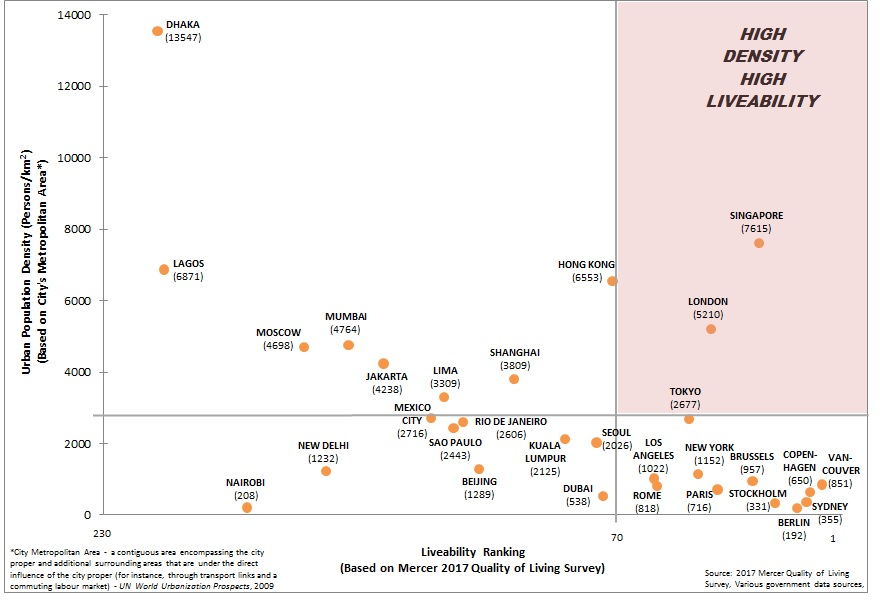 There are 3 main components which can be perceived as the biggest barriers that the city of Singapore has to face.

First, by and large, Singapore is an island where resources are scarce. Hence, the city needs to continuously seek innovative solutions in order to overcome these challenges, and at the same time, strive to pursue the best living standards for inhabitants. The lack of land, potable water resources, land for agriculture enabling self-sufficiency, and availability of energy, are all constraints that Singapore needs to overcome and keep in mind for the future development of the city.

Second, economic issues also impose constraints on Singapore. The Singapore market is relatively small in comparison to neighboring countries, so the city is often questioning: “To whom can we sell our products? What type of products do we need to sell? What type of internal and foreign market penetration can we have in Singapore?”

Third, Singapore is ethnically and culturally diverse. It’s a cultural melting-pot and constant effort is necessary to ensure social integration The main portion of Singapore inhabitants and citizens are of Chinese origin, followed by Malay and Indian origins. Furthermore, expatriates and tourists bring a great many foreigners to the city.

What have been the three most successful initiatives which have truly made a difference in the living standard of Singapore?

First, structured housing policy, making sure that everyone has an adequate home in Singapore.

Second, to have a clean city with adequate sewage and waste removal infrastructure.

Third, to thrive in building a Green Singapore. A clean and green city has often been used by Singapore authorities to promote and define the city as one of their highest achievement.

While infrastructure, safety, and provision of goods and services are all considered as basic needs for Singapore, they are not the core elements that form the backbone of Singapore’s success.

If you could provide 3 tips for thriving cities to improve their quality of living standard for their citizens, what would they be?

The Quality of Living is the tip of the iceberg and is indeed an important component of the overall holistic and integrated approach of city planning. The diagram below depicts the success which has driven Singapore: 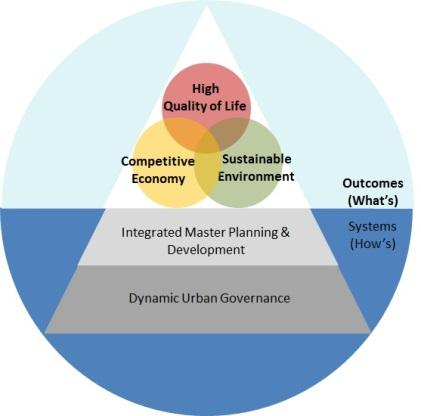 The desired outcomes (the “what’s”) include high quality of life, a competitive economy, and a sustainable environment. All three of these are interlinked and are a result of the underlying systems (the “how’s”), which include an integrated approach to master planning and development, and dynamic urban governance. Without a clear urban strategy, it would be difficult for a city to be competitive, sustainable, and have a high quality of life for their inhabitants.

Talent and business attractiveness in a city often correlate with high living standards. Would you agree with this sentence? Could you please provide us with an example or initiative that Singapore achieved during the last years?

Talent and business attractiveness are indeed correlated to high living standards of a city. Singapore has pushed to attract businesses and talent through various strategies, of which four main ones are:

According to you, what would be the main priorities for Singapore in the next 20 years?

Singapore’s main issues will remain the same over the coming decades – Singapore is an island; therefore, resources have been and will continue to be one of the main challenging drivers. Should Singapore want to remain competitive, it will need to grow both its economy and its population. There is a need to find more innovative ways to increase our liveability, even though our population will continue increasing in an already highly-dense city.

We are conducting several research initiatives and launching innovations to make sure the city can continue to foster a high living standard for its residents. A key objective of Singapore is to become a city that is nature friendly through various initiatives such as clean transportation and clean energy. Singapore aims to be aligned with nature and as well as to be sustainable in the long term.

Through the sharing of information and forums, we have been able to learn from other cities around the world about various best practices. At the same time, we’ve provided guidance based on our experiences, challenges and successes that Singapore went through and may continue to face in the future.

Are there any cities which you think have done a lot towards improving the living standard of their residents and citizens over the past decades?

The Prize is awarded to cities and recognizes their key leaders and organizations for displaying foresight, good governance and innovation in tackling the many urban challenges faced, to bring about social, economic and environmental benefits in a holistic way to their communities.

As a city decision maker, what have been the key challenges and concerns you have had to overcome to implement ideas, best practices, and improve city quality of living in Singapore?

Singapore sought to create a garden city as it started developing in the 1960s. Since then, as Singapore’s density continues to rise, the city strives to keep up with high living standards for its inhabitants. Singapore has intensified efforts to embrace nature in order to achieve its vision of becoming a City in a Garden. In the future, the Centre for Liveable Cities envisions that Singapore would work towards being a city that is fully integrated with nature. 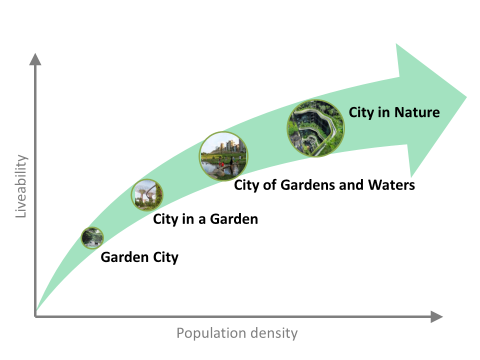 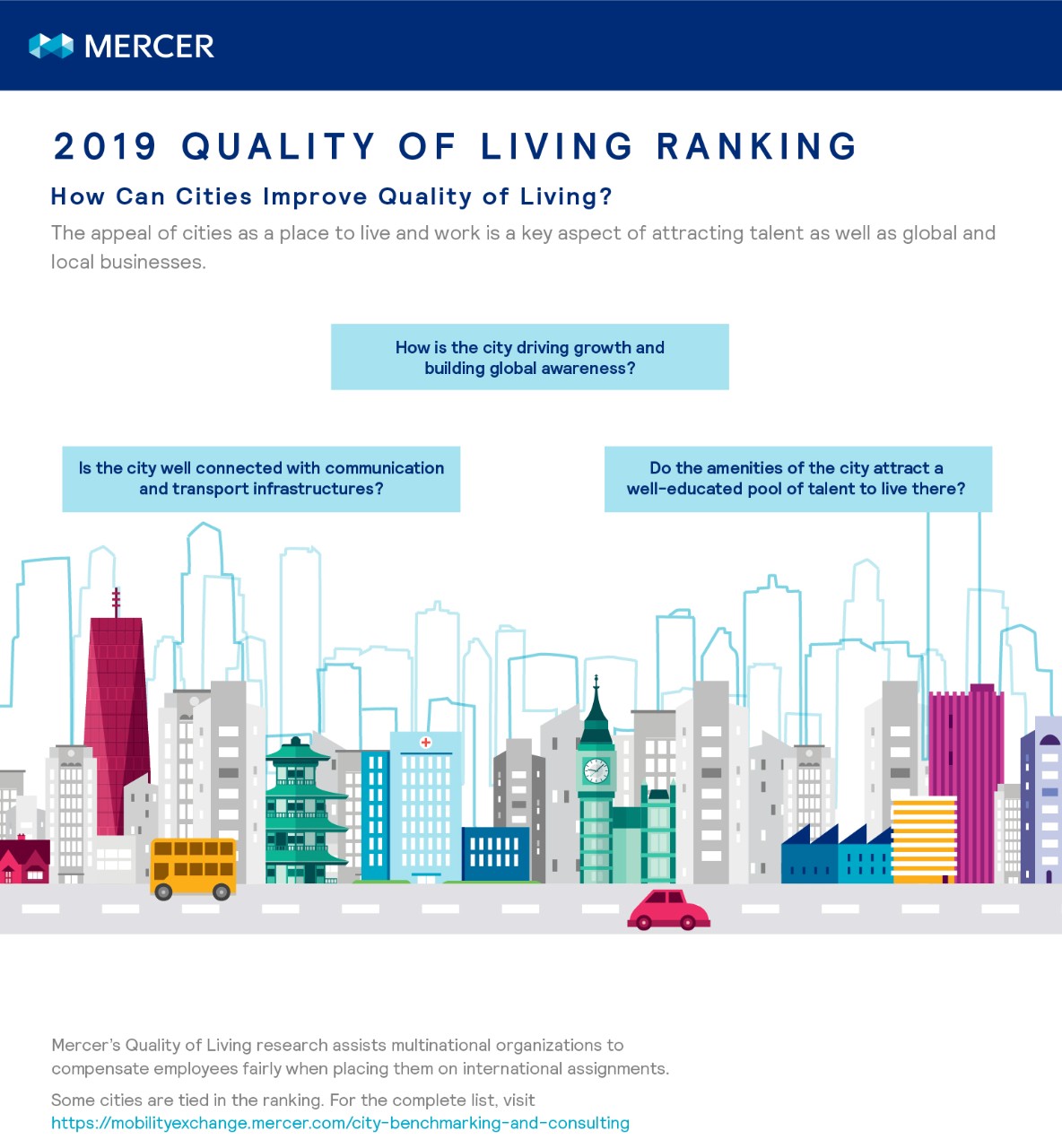 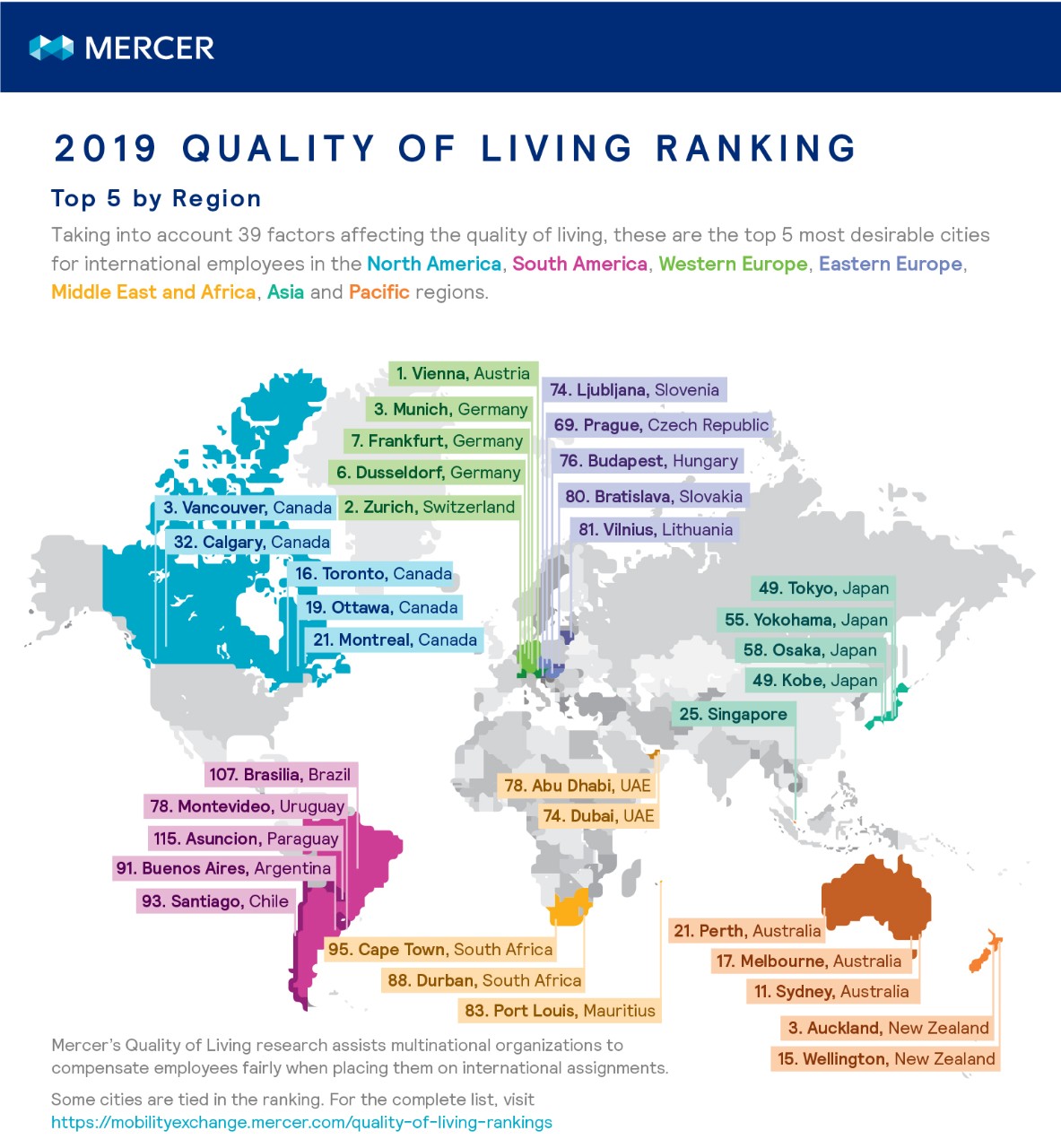 This ranking indicates differences in quality of living factors affecting expatriates in popular assignment destinations and should not be used as the basis for determining hardship premiums, as many complex and dynamic factors must be taken into account. Please contact us about developing your international assignment program.

Thrive 45 Singapore: Does Your Organization Enable Your Talent To Thrive?