According to Mercer’s 25th annual Cost of Living Survey, eight of the world’s top 10 most expensive cities are located in Asia as a result of the region’s high costs for consumer goods and a dynamic housing market.

Although housing prices have remained stable with no major currency fluctuation against the US dollar, Singapore has moved up one place from last year, as the third most expensive city for expatriate assignments, fueled by sustained demand in quality housing and rising affluence. Other cities in the top 10 are Hong Kong (1), Tokyo (2), Seoul (4), Zurich (5), Shanghai (6), Ashgabat (7), Beijing (8), New York City (9), and Shenzhen (10).

“Despite the relatively high cost of living, many organizations still see a strong business rationale for moving talent to the city state as it continues to be a very important regional and global hub attracting top-level talent,” he said.

Mr Ferraro added, “while Asia continues to be a major engine of global economic growth, we are also seeing an increased focus on having a clear business case for the assignment, as well as measuring the return on investment.”

In a rapidly changing world, mobility programs have become a core component of multinational organizations’ global talent strategy. Organizations realize that to thrive they must embrace change, adapt to new technologies, and build emerging skills by attracting, motivating, and enhancing talent. According to Mercer's 2019 Global Talent Trends report, 65% of employers across all industries and countries are using mobility programs to enhance their workforce strategies. As a result, multinational organizations are carefully assessing the cost of expatriate packages for their international assignees.

“In a skill-focused economy driven by digital disruption and the need for a globally connected workforce, deploying expatriate employees is an increasingly important aspect of a competitive business strategy for global companies,” said Ilya Bonic, President of Mercer’s Career business.

“There are numerous personal and organizational advantages for sending employees overseas, including career development, global experience, new skillsets, and re-allocation of resources. By offering fair and competitive compensation packages, organizations can facilitate moves that drive business results,” he said.

Mercer's widely recognized survey is one of the world’s most comprehensive and is designed to help multinational companies and governments determine compensation allowances for their expatriate employees. New York City is used as the base city for all comparisons, and currency movements are measured against the US dollar. The survey includes over 500 cities throughout the world; this year’s ranking includes 209 cities across five continents and measures the comparative cost of more than 200 items in each location, including housing, transportation, food, clothing, household goods, and entertainment.

Asia Pacific
Eight of the top ten cities in this year’s ranking are in Asia due in part to a strong housing market. Hong Kong (1) remains the most expensive city for expatriates both in Asia and globally as a result of the housing market and currency being pegged to the US dollar, driving up the cost of living locally. This global financial center is followed by Tokyo (2), Singapore (3), Seoul (4), Shanghai (6), and Ashgabat, Turkmenistan (7).

Australian cities have continued to fall in the ranking due to the depreciation of the local currency against the US dollar. Sydney (50), Australia’s most expensive ranked city for expatriates, dropped twenty-one places. Melbourne (79) and Perth (87) dropped twenty-one and twenty-six spots, respectively.

The Americas
Cities in the United States climbed in the ranking due to the strength of the US dollar against other major currencies as well as the significant drop of cities in other regions. New York jumped four places to rank 9, the highest-ranked city in the region. San Francisco (16) and Los Angeles (18) climbed twelve and seventeen places, respectively, while Chicago (37) jumped fourteen places. Among other major US cities, Washington, DC (42) is up fourteen places, Miami (44) is up sixteen places and Boston (49) is up twenty-one spots. Portland (107) and Winston Salem, North Carolina (138) remain the least expensive US cities surveyed for expatriates.

In South America, Montevideo, Uruguay (70) ranked as the costliest city followed by San Juan (72), which jumped twenty-three spots. Other cities in South America that climbed on the list of costliest cities for expatriates include Panama (93), Costa Rica (131), and Cuba (133) rising twenty-one, ten, and twenty-two spots, respectively. Cities that fell in the ranking despite price increases on goods and services and accommodation costs include Brazil and Argentina. In particular, São Paolo (86) dropped twenty-eight spots. Rio de Janeiro (121) dropped twenty-two places, while Buenos Aires (133) fell fifty-seven places. Managua (200) is the least expensive city in South America.

Europe, the Middle East, and Africa
Only one European city is among the top ten list of most expensive cities, which is Zurich at number five, followed by Bern (12). Geneva (13) is down two places. Eastern and Central European cities, including Moscow (27), St. Petersburg (75), Prague (97), and Warsaw (173), dropped ten, twenty-six, fourteen, and nineteen spots, respectively.

Cities in Western Europe, including Milan (45), Paris (47), Oslo (61), and Madrid (82), fell in the ranking as well, by twelve, thirteen, fourteen, and eighteen spots, respectively. The German city Stuttgart (126) dropped significantly as did Berlin (81) and Dusseldorf (92). Cities in the United Kingdom saw modest drops, including Birmingham (135), which fell seven places, Belfast (158) six spots, and London (23) four spots.

“Despite moderate price increases in most of the European cities, European currencies have weakened against the US dollar, which pushed most cities down in the ranking,” said Yvonne Traber, Global Mobility Product Solutions Leader at Mercer. “Additionally, other factors like recent security issues and concern about the economic outlook, have impacted the region.”

Tel Aviv (15) continues to be the most expensive city in the Middle East for expatriates, followed by Dubai (21), Abu Dhabi (33), and Riyadh (35). Cairo (166) remains the least expensive city in the region. “Many currencies in the Middle East are pegged to the US dollar, which pushed cities up in the ranking, as well as steep increases for expatriate rental accommodations,” said Ms. Traber.

Despite dropping from the top ten most expensive cities for expatriates, N’Djamena (11) remains the highest-ranking city in Africa. Following are Victoria (14) rising seven places, and Kinshasa (22) rising fifteen spots. Libreville (24) dropped six places. Dropping one spot, Tunis (209) in Tunisia ranks as the least expensive city in the region and globally.

The figures for Mercer’s cost of living and rental accommodation cost comparisons are derived from a survey conducted in March 2019. Exchange rates from that time and Mercer’s international basket of goods and services from its Cost of Living Survey have been used as base measurements.

Governments and major companies use data from this survey to protect the purchasing power of their employees when transferred abroad; rental accommodation costs data is used to assess local expatriate housing allowances. The choice of cities surveyed is based on demand for data. 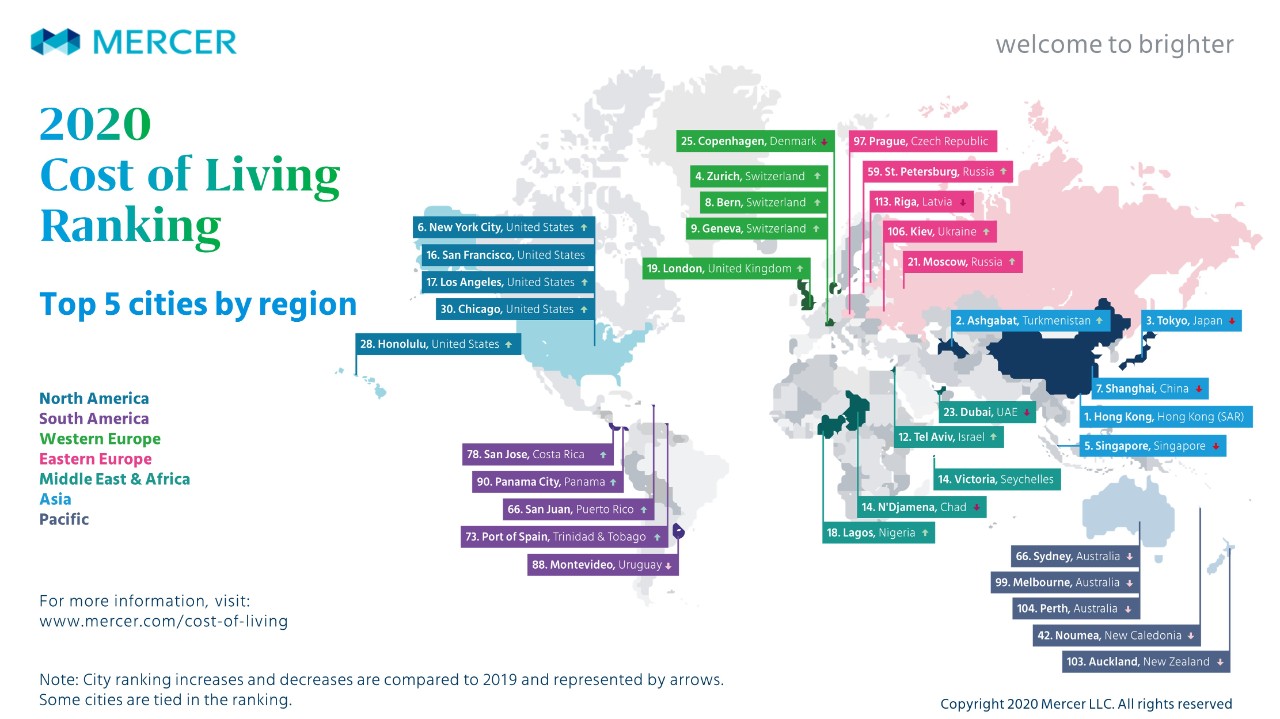